Welcome to the results of the 2020 GemStone IV TownCrier Ranger Survey! The intent of this survey was to gather detailed information on player satisfaction in regards to all aspects of the ranger class in the game GemStone IV.

This section is intended to provide specifics on how players of rangers view their utility skills. Questions asked about: amount of first aid, survival, and stalking and hiding trained per level; comments on reasoning for training paths. 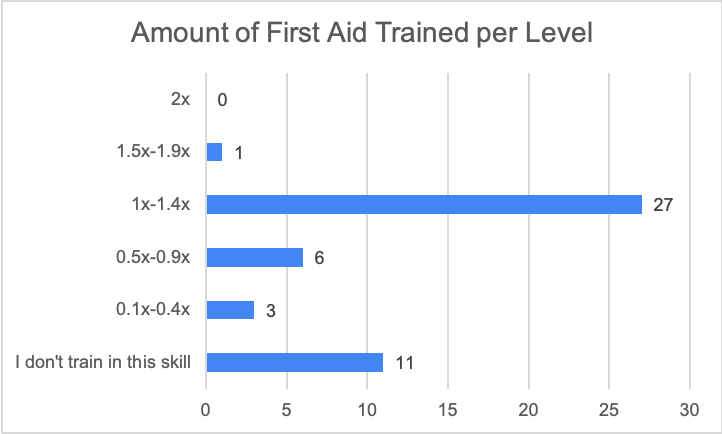 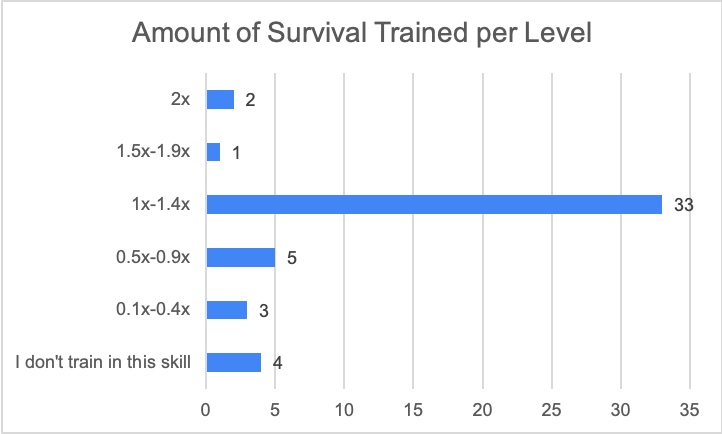 Six of the thirty-eight respondents indicated roleplaying somehow in their response. Not all comments related to that topic have been included below.

Twenty-three of the thirty-eight respondents indicated they had trained the way they did because of skinning or otherwise mentioned skinning in a way that indicated such. Foraging had less mentions (14).

Many respondents talked about tight TPs being a reason they didn’t get more ranks in either skill.

Survival is a core skill for rangers – and substitutes in a pinch for the more expensive first aid. [Dhairn, 16]

They’re cheap, so it’s not like I’m saving many TPs when I’m 0.5x-ing them, but sniping from hiding takes up a lot of points so I chose to cut back on a lot of things including first aid and survival. [Nyqa, 17]

Trained mostly for self sufficiency (foraging for herbs and less RT when eating them) and silver income (from good skinning). [T. Aelo’tyn, 35]

TPs are too tight to train any more in survival, though I would like to. I’ll backfill it later. GoS obviates the need for FA. [Seomanthe, 39]

I love my training in first aid and survival. I feel both of those are core aspects to a rangerly build and personality. I wanted to be good at skinning and foraging and generally all sorts of outdoorsy or woodland skillsets. I love having good utility, and I will continue to train in them for life. [Aeith, 72]

I had 1x First Aid when leveling, which was nice for extra skin value, but since there’s nothing to skin in the Sanctum, I no longer bother at cap. I believe I was 1.5x or more Survival while leveling too, again for skin value, but dropped to 1x at cap since there are likewise no capped foraging bounties in Solhaven or the Landing that don’t involve the Confluence. At least the Rift has them, but in that case what you want is a cleric to deal with the cursed herbs. [Leafiara, 100]

In all of my training, I focus primarily on combat skills but I like the ability to forage for my own herbs and skin my own creatures. Because both skills are relatively inexpensive for rangers, I was able to work them in without sacrificing a large amount of combat ability. [Anarquendi Aldudil, 100]

I plan to do more training in both eventually (likely far into postcap), but 1x in each appears to be entirely sufficient for everything I’ve tried to do so far. My skins are usually magnificent quality, I forage just about everything quickly, and I can tend almost any bleeder completely in 3 seconds. I think the only place where I run into environmental problems that more Survival skill would help solve is in the Elemental Confluence, and that’s a capped hunting area that I don’t particularly like hunting in. [Lanzerik, 100]

Reduced round times for eating herbs, and increased skinning success and quality. Forage Sense is also rather handy to have access to, as well as the reduced movement penalties in applicable places, such as the confluence, and across icy regions. [Name Withheld, 100] 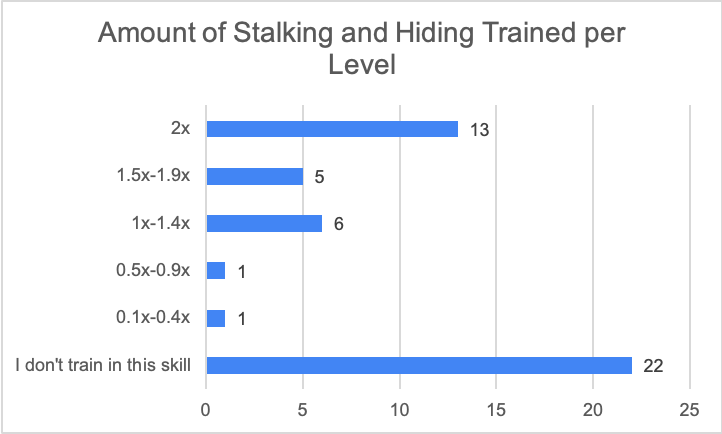 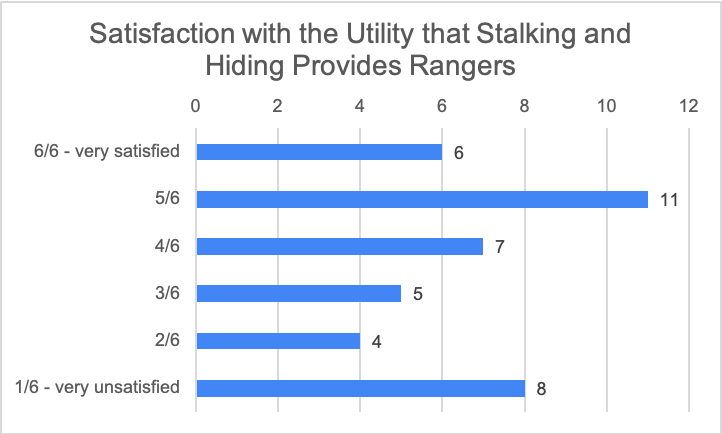 As mentioned before, I cannot afford it and ambush. [Sreka, 16, 0x]

The training path of a hiding archer/ambusher felt to constrained and TP-expensive for T.’s roleplay, so they don’t train in it. [T. Aelo’tyn, 35]

To increase her effectiveness at solo hunting, so she can take advantage of the pushdown from ambushing. [Seomanthe, 39]

I do it to hide from creatures when I run low on mana and cannot cast camoflauge [Direthorn, 58]

I would love to do the sniper build, but the TP investment and how hunting operates without warcamping makes it mostly only fun flavor. [Kedsie, 61]

When rangers could triple in Stalk/Hide I did 3x as well. It completely fits my archetype, as I wanted to be unseen and very hard to find by other players or critters. I’ve enjoyed this quite a bit in both hunting and roleplay. [Erek, 75]

I hunt in a pair, hiding is not well suited to that playstyle [Maodan, 86]

Combined with 608, rangers are unparalleled hiders. Firing arrows on unwitting creatures from the shadows is very satisfying. [Rouste, 100]

I was previously trained this way [ed. in stalking and hiding] and found it to be less useful and more cumbersome. [Leifa, 100, 0x]

Animal mobs are too perceptive, makes the skill worthless in my opinion. [Valdarrow, 100]

My hunting style is primarily hiding and ambushing in the hopes of killing with one or maybe two carefully aimed attacks, so hiding skill is incredibly important to me. It works well enough that I still hunt that way after 20+ years of watching other people hunt differently.

I find it to be incredibly irritating that even as a capped ranger with my hiding skill maxed out, there are creatures well below my level that find me and point me out regularly and with apparent ease. I’ll refrain from using strong language about it here, but believe me, I’m thinking it. Using 608 is virtually the only way I can get hidden around some creatures, and even then they often sniff me out before my casting roundtime is over. Absurd. I get that some animals are supposed to be really perceptive due to an extreme sense of smell or whatever, but they should never be so perceptive that I SIMPLY. CAN’T. HIDE.

Another gripe that I’ll note here even though it’s a problem that I consider to be outside the responsibility of the game developers: characters that hide constantly as part of their hunting strategy are at a massive disadvantage relative to characters that stay in the open because of auto-hunting scripts that don’t check for hidden characters before attacking creatures. A big part of the problem is that scripts move so fast that hidden characters don’t really have the chance to make their presence known (whereas it’s usually obvious quickly if you’re not scripting), and then scripts are usually unresponsive to a hidden character making themselves known once the attacking starts. The new ObviousHiding flag is an excellent tool that I really appreciate, but unfortunately it’s up to players to incorporate that into their hunting scripts. I’m not personally against script hunting when it’s done right, but the selfish people with the “you should always hunt with a disk” or “maybe you just need to change your play style” attitudes detract from my enjoyment of hiding and ambushing. [Lanzerik, 100]

I got 2x in Hide purely for RP. It’s occasionally useful for sniping, but not at all necessary. I usually only snipe if it’s a swarm area – Sanctum with other people, invasions, etc. It’s generally too slow, and even Shadow Mastery doesn’t really mitigate the extra RT enough for it to be worth the added time to snipe. [Alisaire]