Welcome, paladin players and other interested parties, to the results of the TownCrier’s paladin survey! In this two-part survey that ran from May 19th to June 23rd, we asked players to share comprehensive thoughts on the paladin profession in the world of GemStone IV.

This survey ran from May 19th to June 23rd, 2020, with two parts released simultaneously that were filled out independently. Participants could fill out one and not the other if they so chose. Each survey was comprised of a mix of qualitative and quantitative questions.

All responses have been passed along to dev GMs in raw, unedited form, but in the upcoming pages of this public report, I’ve aimed to summarize a representative sampling of recurring themes and thoughts among players’ responses. To this end, I’ve highlighted comments that stuck out as exceptional for being either:

Some players gave permission to attach their names to their responses in this public summary while others opted for anonymity. Comments were chosen for quality over quantity; as an example (not a real one), if ten people said that 1620 Aid the Fallen should be deleted while one person said that they cast it five times a day, at best I only include one comment from each perspective. (The exception would be if some of the ten give different reasoning to their arguments.)

Emphasizing how many people simply like or dislike a spell, combat maneuver, or other element of paladins has been largely left to bar charts instead of quoting anybody and everybody.

For more details on how comments were selected, please see the bottom of this page below the table of contents!

Lastly, to support those using a screen reader, all charts have also been described in text below the image.

Here are the demographic breakdowns: 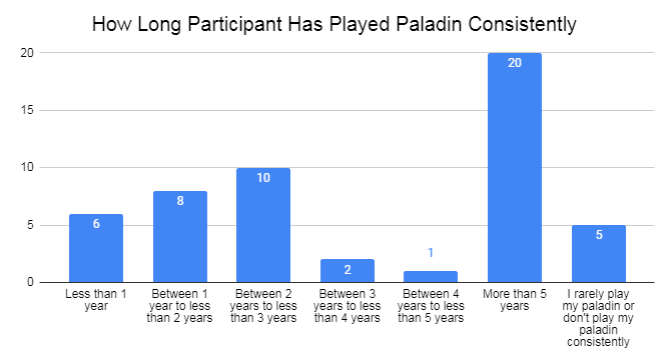 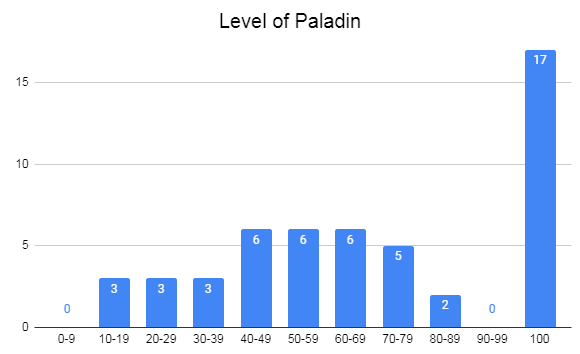 For those reading an archive of this report in the future, please be aware that these experience totals were gathered prior to the release of ascension. Future surveys will probably have to collect this data differently.

Intent of Character vs. Actual Use 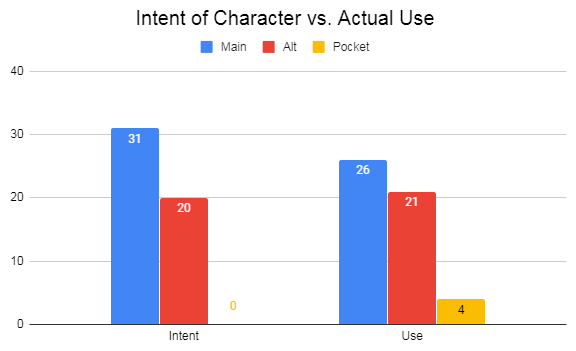 In a pair of questions, players were asked whether they intended for their paladins to be main characters, alts, or pocket paladins. The latter was defined with an example of a paladin used only for armor fluidity, Mantle of Faith, or other abilities supporting other characters.

I’ve created another graph below breaking down how (or if) actual use changed from intent on a per-player basis:

Shifts of Intent and Use 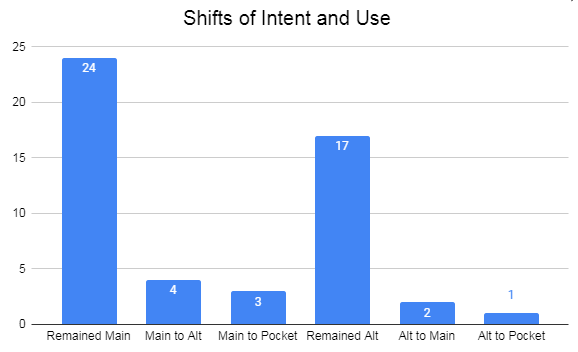 Use as a Main

Later questions throughout the survey will touch on what players love about the paladin profession, but those who intended their character to be a main and it remained so didn’t elaborate much on why that is during the early demographics section.

A few did express misgivings, though; one said that their paladin remains a main “more due to the name, and friends, than what the class currently provides” (Khaell, level 100) and another said “Intentions haven’t changed yet but playing my capped wizard has made me think about it” (Kal, 100).

As for those who intended to create a paladin alt only for it to become a main, one simply said they’re playing with their wife (name withheld, 36) while another wrote:

I rolled a paladin when I returned from a long break because I really wanted to see what they were all about. After briefly playing him, I realized that I like to use a polearm but couldn’t possibly do that and shields, which also had new abilities, and maintain the training plan I needed.

So I went full lance mode but found the initial training regime to be very strict and somewhat painfully limited. However, as I progressed, I realized that my paladin had some unique roleplaying capabilities, and was a very capable hunter which made up for those short comings.

He is a half-krolvin as well so figuring out religion for him was a treat and still is as I explain how Khar’ta is his deity but is the same as Charl. My paladin has been pretty fun ever since. I love the spiritual nature combined with melee prowess to include heavy armor. As I level him I really enjoy all the higher level capabilities and find him to be extremely powerful.

My only down point is, I don’t seem to have much of a group contribution as I would like (Consecrate and a Mantle) and I don’t have a guild to work on in tandem with leveling. I look to other professions to fill that gap (Warrior and wizard alts).

Use as an Alt

Some reasons given for creating paladin alts included “to learn […] how Paladins fit into the greater Gemstone schema, in terms of their mechanical benefits and detriments” (Whirlin, 100), being “a good change of pace from my main, a warpath” (Remilia, 49), and a player who “considered him for main for a while, but decided to stick with bard due to better utility.” (Tarthan, 17)

As for those who intended to create a paladin main only for it to slip into being an alt, one reported using their paladin as bait while farming essence on their wizard (“Holy Warrior”, 100), another said they came back [presumably to the game after a break] and like the monk profession (Picalo, 520), and others brought up concerns about utility and diversity:

The class has no diversity, or versatility in my opinion. Amazing kit, but that’s about it. There is no real ability to […] serve your dark or light pantheon. It’s a warrior with spells.

Paladins are an afterthought class. Nothing about them is desirable to a group or community.

Use as a Pocket Character

The player making the less dramatic of these shifts, from alt to pocket paladin, wrote:

Too slow to hunt with and hard time competing with other classes when it comes to hunting ability. Lack of good training options. Everything a paladin does a cleric seems to do better.

As for the three players who meant to make a paladin main only for it to become a pocket character, each one explained why in detail:

I found the play style to be too convoluted for my liking. I found myself too heavily reliant on melee because of the hindrance of being in heavy armor. I found I had to be in heavy armor because I was taking too many hits. Then I saw a forum post break down how exactly Paladins are worse, in every way, to Warriors and I was like…why bother?

Nothing about the class made it fun (1650 was ok but at the level I was at I didn’t have enough spare points to increase spirit control for divine energy – plus once every 10 minutes???). I was also finding myself constantly running when more than 3 critters got into the room. 1630 wasn’t putting them down for long enough (not to mention it was eating through my mana, especially with the failure rate) to safely deal with them.

Paladins, to me, are very much where clerics were at prior to the updates by GM Estild and team a year ago. Paladins are very one dimensional and too many of their abilities seem to incentivize players into using a two-handed weapon or TWC rather than a weapon and shield.

The playstyle was too constrictive. In order to hunt effectively, I didn’t have enough TPs to do anything except train combat skills. I couldn’t even skin. And, without anything to offer other players, it became boring.

If they aren’t already, things will start to get interesting in the next section–since nearly every point that’s been touched on so far saw agreements and disagreements among the survey responses.

These questions and many others are yet to come.

(coming soon as the report gets created!)

Generally speaking, my goals while choosing comments to include were:

Please note that, overall, highlighted comments seemed to trend toward concerns or complaints. I tried to avoid this as much as possible in line with goal #2, but dissatisfied players just tended to give more detailed responses. (This might be partly explained away by the players who love every aspect of their paladins being more interested in spending time playing the game than spending hours filling out a survey, but that’s only my speculation!)

(coming soon as the report gets created)

Speaking to Lylia, Hapenlok says, “There’s quite a few possibilities I’ve calculated in the hour I’ve been standing here. None of them are good.” 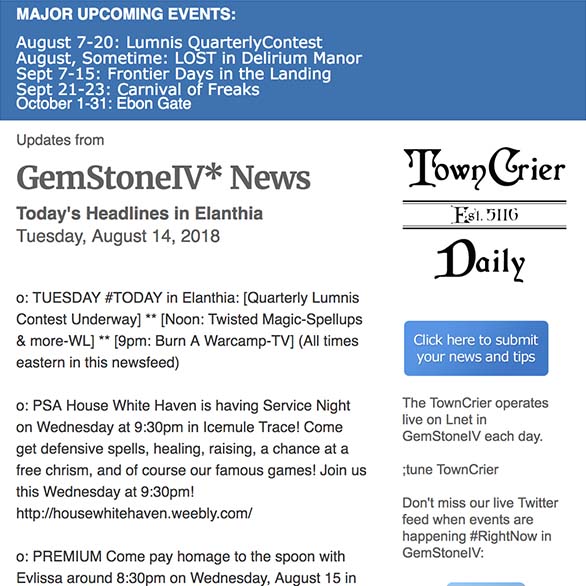 Xanlin works up useful tips and repository script suggestions from your suggestions and his favorites. He is a favorite locksmith in and around Ta’Illistim and the author of the much-loved Lich script ;invdb (you should try it if you have not already).